According to the IMF projections, our country can expect an improvement in economic parameters in the next five years, which will be reflected in the growth of real incomes (salaries and pensions), ie living standards. Of course, there is always a risk of projections, but after a strong economic shock caused by the pandemic, it is difficult to expect that something similar could happen again, which could significantly disrupt the IMF’s forecasts.
It can be said that in the first half of 2021, Serbia has good economic indicators, despite the difficult circumstances due to the pandemic. That the Serbian economy is booming is indicated by three main macroeconomic variables (along with GDP): industry, exports (and imports), and retail trade turnover.
Namely, compared to last year, in the period January-May, industry grew by 10.3%, retail trade by almost 13% in real terms, exports by 28% (and imports by 18%, both in euros). Otherwise, the strong growth of exports is a consequence of the strong increase in exports of the processing industry (of almost 27%). The continuation of a solid increase in Serbia’s merchandise exports will be supported by further growth in investments in export-oriented sectors, as well as a recovery in external demand (with the expected successful vaccination process worldwide). In addition, the economic recovery was significantly supported by strong growth in construction (estimated at close to 20% in the first quarter of this year).
Although the tendencies in May were not as good as in previous months, which is expected given the low base, especially in April, it seems that the high growth of economic activity in 2021 will be achieved. The seasonally adjusted GDP index shows that economic activity in the first three months of 2021 has already slightly exceeded its highest pre-crisis level, while high growth in the second quarter (probably around 15% year on year) will further improve Serbia’s relative position.
According to the statements of the highest officials, the year-on-year economic growth in the first half of 2021 will be high at 8.3%. Experts gathered around the Quarterly Monitor also claim that high economic growth (6%) will be achieved in 2021 (while the economies of European countries are estimated to achieve almost two percentage points lower GDP growth).
The European Bank for Reconstruction and Development (EBRD) also increased Serbia’s growth forecast for this year to 6%, which is twice as much as its estimate from September 2020. The EBRD emphasizes that domestic economic activity will be strongly supported by additional government health expenditures, subsidies for salaries and one-off payments to pensioners and other categories of the population (the Government has adopted additional fiscal incentive measures in the amount of 4.5% of GDP or two billion euros in the budget for 2021).
The IMF also projects real GDP growth of Serbia of 6% in 2021, while on the other hand, the World Bank is somewhat more cautious, with the projected growth of Serbia of 5% this year. The same projection of growth was given by the rating agency Standard and Poor’s, which in its June report confirmed Serbia’s credit rating at “BB + / B” and kept stable prospects for its further increase (so we are in the group of rare countries whose credit rating has not been downgraded).
Accelerating inflation
As in other countries in the region, under the influence of higher energy and food prices, as well as due to the low base effect from the same period last year, inflation accelerated, reaching 3.6% year on year in May (twice as much as expected), is slightly above the central value of the NBS target.
Namely, year-on-year inflation in May in the USA reached 5% (projected 1.6%), the EU 2.3% (projected 1.3%), Germany 2.4% (projected 1.1%), France 1.8 % (estimated 0.9%), Italy 1.2% (estimated 0.7%), in Hungary 5.3% (estimated 3.3%), Poland 4.6% (estimated 2%), Romania 3, 2% (projected 2.5%), Bulgaria 2.3% (projected 1.4%).
The increase in inflation is a consequence of disturbances in individual markets due to the pandemic (supply chain disruptions, as a result of which input stocks were depleted during the pandemic, whose prices consequently rise due to the inability of producers to adjust to increased demand in the short term). However, if inflation is prolonged and if price growth encompasses a larger number of products, it is more likely that the causes of inflation are expansive monetary and fiscal policy.
It is a good sign that already in June this year, year-on-year inflation slowed down to 3.3%, while in the coming months inflation is expected to move around the central value of the target of 3% (and after the cessation of temporary factors slowdown from the second quarter of 2022).

The absence of significant inflationary pressures is indicated by the stable movement of core inflation, which amounted to 2% year on year in June. Also, an important factor of low and stable inflation is the provided relative stability of the exchange rate, as well as the anchoring of inflation expectations of the financial sector and the economy (by the way, prices of goods and services in Serbia are only 58% of the EU average).
In addition to accelerating inflation, the unfavorable trend is the growth of unemployment in the first quarter of this year (compared to the first quarter of 2020), by 2.3 percentage points (Labor Force Survey). In addition, instead of the originally planned fiscal deficit of 3% of GDP and the planned reduction of the share of public debt relative to GDP, the fiscal deficit will be between 6% and 7% of GDP according to the new government plans, which will lead to public debt growth. reach 60% of GDP, but this level is not yet critical (otherwise it is planned to reduce the fiscal deficit from about 7% of GDP in 2022 to 3%, and then continue to decrease to 1%).
Why is Serbia going through the crisis relatively well?
The key is the structure of the economy. Namely, it is about the specific structure of the economy, ie the large share of activities such as agriculture and the food industry, which had growth in the crisis. In addition, Serbia has a very small share of tourism in GDP, as well as the car industry and other industries most affected by the crisis. In addition, strong anti-crisis measures, primarily fiscal, but also monetary policy that will continue in 2021, as well as relatively mild anti-epidemiological measures (from mid-May 2020), and favorable trade relations (affecting the growth of net exports in late 2020 and early 2021) further improved the relative position of Serbia.
Strong investment activity, which in the years before the pandemic crisis brought solid rates of economic growth, also plays an important role in the good ranking of Serbia. Strategic diversification of investors and markets, ie the fact that the largest part of FDI in Serbia goes to industry, other export-oriented sectors and infrastructure construction, also stimulates economic growth. The best example is the car industry, where Serbia has the most diverse range of products produced in this area – from tires, batteries, conductors, to the most sophisticated products such as microchips and electric motors (eg exports of auto components have increased fourfold since 2012, to 2 billion euros).
In Serbia, the realization of infrastructure projects continued during the pandemic. The share of state capital investments in GDP increased to 5.4% in 2020 (from 4.9% in 2019), while in 2021 they should reach 7% of GDP.
Serbia has been successful in the development of the IT sector (exports of services related to the IT sector have almost quadrupled in eight years – to over 1.4 billion euros in 2019, and export growth was achieved even in the crisis of 2020, with the continuation of this trend this year).
In addition, agricultural exports have almost doubled since 2012 – to almost 1.3 billion euros in 2020, while dynamic growth (of as much as 20%) continued in the first five months of 2021.
What can we expect in the medium term?
As we mentioned, in 2021, the IMF projects real GDP growth in Serbia of 6%, and then the continuation of high growth rates. These projections are minimally different from those presented by the IMF in its April report (IMF, 2021). 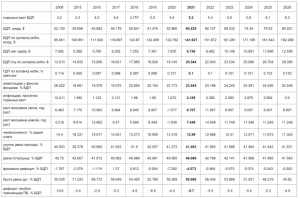 The table shows the IMF’s expectations for Serbia as of 2026, which indicate that this international institution is quite optimistic about the economic prospects of our country.

This year, GDP per capita will be close to $ 9,000, and its purchasing power equivalent over $ 20,000. The share of investment in GDP is estimated to approach the famous quarter of GDP in 2026, while inflation will remain stable and relatively low (around 3%). The volume of export growth will be around 11%, which means that its growth rate, expressed in euros, will be around 13%. A slight decline in unemployment is also projected, while it is estimated that the fiscal balance could be almost balanced, although projections for this year did not include a budget rebalance. The balance of payments deficit will remain at around 5%, which is considered a long-term sustainable level, and public debt should start declining as a share of the country’s GDP after growth this year.
In summary, our country can expect an improvement in economic parameters in the next five years, which will be reflected in the growth of real incomes (salaries and pensions), living standards. Of course, there is always a risk of projections, but after a strong economic shock caused by the pandemic, it is difficult to expect that something similar could happen again, which could significantly disrupt the IMF’s forecasts.